“Nine Wooden Towers” was an installation built in a large field using downed saplings and scrapped lumber sited elliptically around a 15 acre field in rural Virginia at the Virginia Center for Creative Arts, Amherst, VA.

The towers I’m interested in are not modern telecommunication towers or urban skyscrapers. They are raw and primal and built by hand.  They are scrapped together by a need to piece a puzzle, to find an answer, to settle the longing. 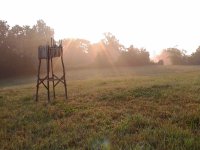 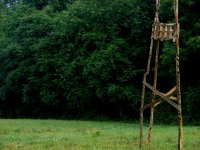 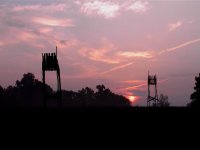 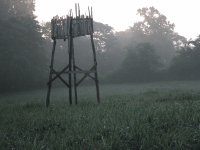 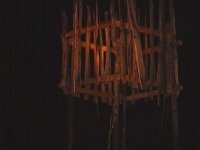 It seems impossible to encounter Katherine Kavanaugh’s nine Gothic wooden tower structures, arranged elliptically and rising from a recently mowed field on this Virginia farmstead turned arts colony, and not be struck by a series of compelling analogies: the guard towers of internment and concentration camps; prison watchtowers; the burning towers of Troy; the World Trade Center towers in flames. Less austerely, they recall the rickety play forts of childhood where, even as children, we learned to deny the history of our invasion, instead play-acting early settlers defending themselves against the indigenous people who preceded us.   Kavanaugh’s installation also evokes the strategy of setting signal fires to warn farming peoples of invaders, perhaps in the Bronze Age, or, in more peaceful times, some ancient solar ritual celebrating the growing season as spring evolves into summer and solstice approaches. In 2007, when living in the United States increasingly means being subjected to unprecedented government scrutiny as this regime continues to erect structures of surveillance and control—structures that “tower” over the heads of most of its citizens—it is necessary to remind us all of the impermanence of such constructions, however imposing, as well as of our own responsibility to dismantle them before they come to seem a natural part of the landscape. Like Kavanaugh’s own towers, conceived of and fabricated in less than a week’s time, such structures seem to have arisen overnight and without warning; they are as mesmerizing as they are eerily familiar.